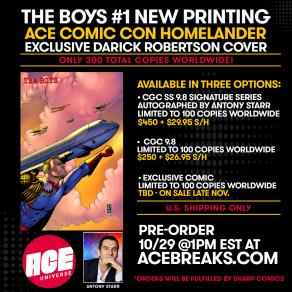 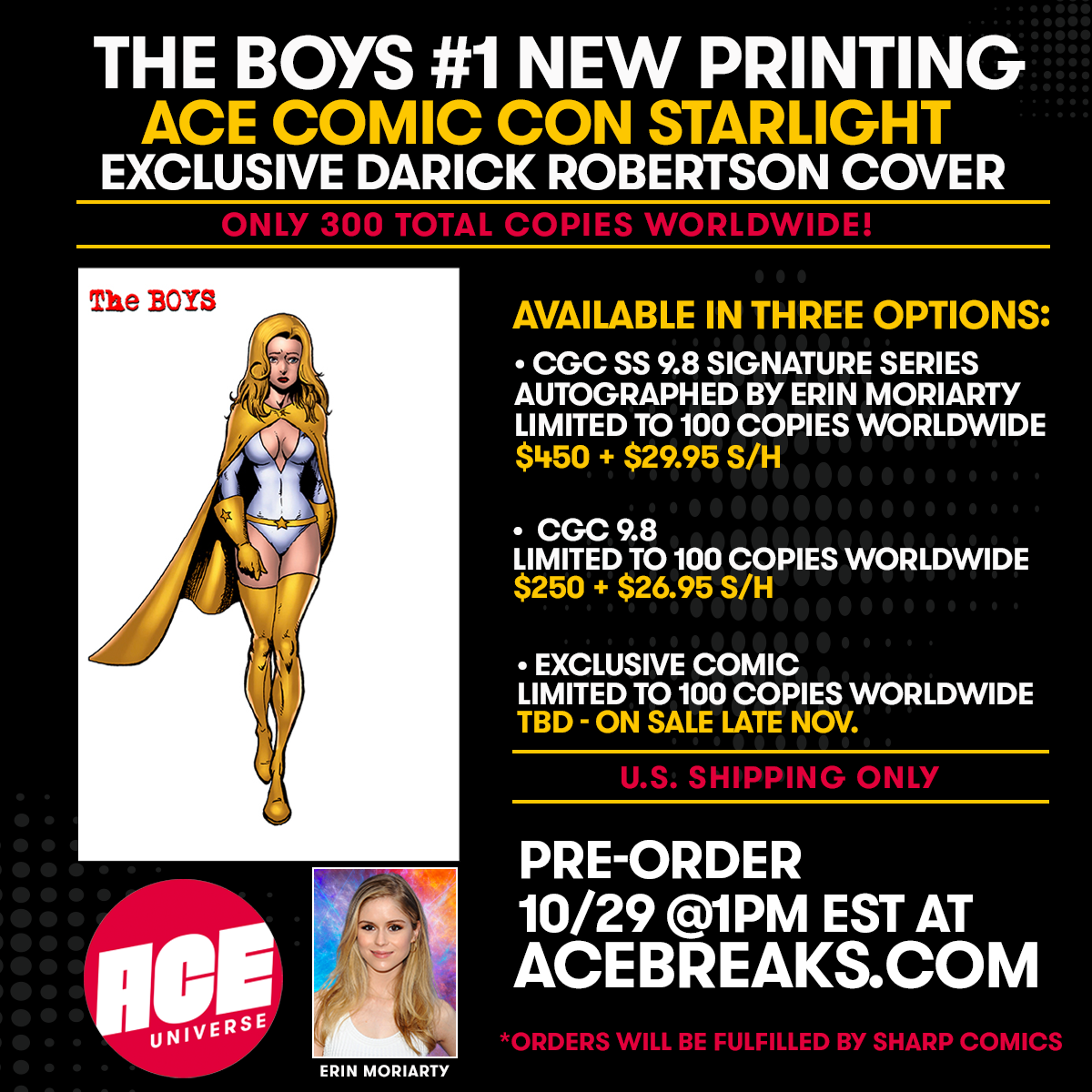 The collection will be available in three options - CGC Signature Series 9.8 (Limited to 100), CGC 9.8 (Limited to 100) and Raw! They will be signed by ACE Universe Upcoming Signers Antony Starr (Homelander) and Erin Moriarity (Starlight)
NEW YORK - GeorgiaChron -- In partnership with PMX Events, ACE Universe has announced exclusive comic books from Dynamite Entertainment for their upcoming ACE ASSIST event. The Boys #1 New Printing ACE Comic Con Homelander & Starlight Exclusive Darick Robertson Covers will be available for pre-order via www.acebreaks.com starting October 29, 2020 at 1:00pm EST. Only 300 copies each will be available for sale. (U.S. Shipping Only)

There will be 3 options available on each:

"The response to this signing was overwhelming," said Stephen Shamus, ACE Universe President. "Once we saw the fan reaction, we knew we had something special and we wanted to commemorate this signing by producing something unique for the occasion. Fans have a perfect opportunity to get the highest quality CGC and CGC Signature Series signed books by Erin and Antony directly from ACE and delivered to their door! The limited nature of these books makes it a one-shot deal!"

ACE Universe (www.aceuniverse.com) is a New York-based and globally recognized live experience and media company founded by brothers Gareb Shamus and Stephen Shamus, who are the world's most innovative producers of Comic Con events. Stephen has personally produced over 175 Comic Con events, booked thousands of celebrity guests, and played host to millions of happy fans. Gareb has shaped geek and nerd culture for almost 30 years and is the leading pop-culture expert, founder of the largest Comic Con tour in the world, an original pioneer and producer of national Comic Cons, and publisher to multiple award-winning magazines that were distributed and translated in over 75 countries. ACE Universe produces premium events in world-class venues that feature the best of Film, TV, Gaming, Virtual Reality, Collectibles, Comic Books, Original Art, Toys, Action Figures, Graphic Novels, Illustrators, Writers, Creators, and Entertainment Programming. Fans can view content from previous events on www.youtube.com/ACEUniverseComicCon and engage with us on Instagram, Facebook and Twitter @acecomiccon.