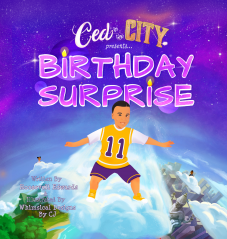 When eight-year-old Cedric receives a magical passport for his birthday, he is able to journey around the world, learning all about different cultures and meeting new friends along the way.
A charming new adventure picture book series that combines teaching global diversity and customs with delightful storytelling is a perfect offering in today's landscape.
ATLANTA - GeorgiaChron -- A very special boy receives an unusual passport for his eighth birthday and he can be magically transported to any place in the world he wants...but he doesn't know where to start. Cedric and his friends first think of interesting and silly places where he can go in this fun and adventurous new picture book series, CedintheCity.

Hawaii! Mars! Cedric's friends have lots of ideas, but then he thinks of the perfect place for his first journey. "I got it!" Cedric sat up enthusiastically. "I want to visit Seoul, Korea. It's my grandmother's birthplace. I've always wanted to see and learn more about her homeland."

In the first books in the series, CedintheCity Presents: Birthday Surprise and CedintheCity Presents: Happy Chuseok, a Korean Thanksgiving, author Roosevelt Edwards expertly weaves informative and charming stories of Cedric being gifted his magical passport for his birthday and using it to travel to Korea where he meets a lovely family and shares in their traditional holiday festivities.

Cedric's magical passport permits him twenty-four hours at each destination. In Korea, Cedric's new friends show him beautiful historical landmarks such as the Gyeongbokgung Palace, teach him some of their language, and invite him to a special dinner at their home.

More on Georgia Chron
"Hey, I have an idea!" Go Eun said enthusiastically. "Cedric, would you like to spend Chuseok with us?"

Cedric and his new friends, Jin Woo and Go Eun, enjoy celebrating together, eating delicious Korean delicacies of bulgogi, japchae, and songpyeon, and playing authentic Korean games. But when it's time for Cedric to travel back home, he can't find his magical passport! What will he do? Cedric's adventure continues as he retraces his steps back to the Gyeongbokgung Palace, wearing traditional Korean clothing to sneak in after hours, and seeking the help of a wise blue magpie who at last helps him retrieve his lost treasure before Cedric's twenty-four hours ends.

Families will delight in reading aloud this sweet and informative story, illustrated with playful renderings of authentic clothing and locations—with new destinations for Cedric's journeys in each book in the series.

Author Roosevelt Edwards is the uncle of Cedric Hutchison II, a vibrant and generous young man who tragically passed away at the young age of twenty-seven. A thrill-seeker traveling to more than thirty-one countries during his inspiring life, Cedric moved from Georgia to Beijing, China, combining his interests in education and travel to teach English abroad and explore new cultures. He later taught adolescents and young adults in Prague and Malaysia.

Cedric was a wanderlust who lived boldly. The CedintheCity series aims to share his love of travel and people, encouraging the youngest of readers to see the world outside of their own, creating a deeper understanding of our global neighbors by imparting knowledge about their cultures. CedintheCity Presents: Birthday Surprise and CedintheCity Presents: Happy Chuseok, a Korean Thanksgiving are available in February 2021, with more books showcasing other countries and cultures to follow.

A percentage of each book's proceeds will go to the CedintheCity Scholars, helping to change the face of American travel by alleviating some of the financial burden and enabling African American students to expand their horizons and deepen their connectivity to other cultures through global travel.

If you would like more information about author Roosevelt Edwards and the CedintheCity picture book series, please visit Cedinthecityforever.com.