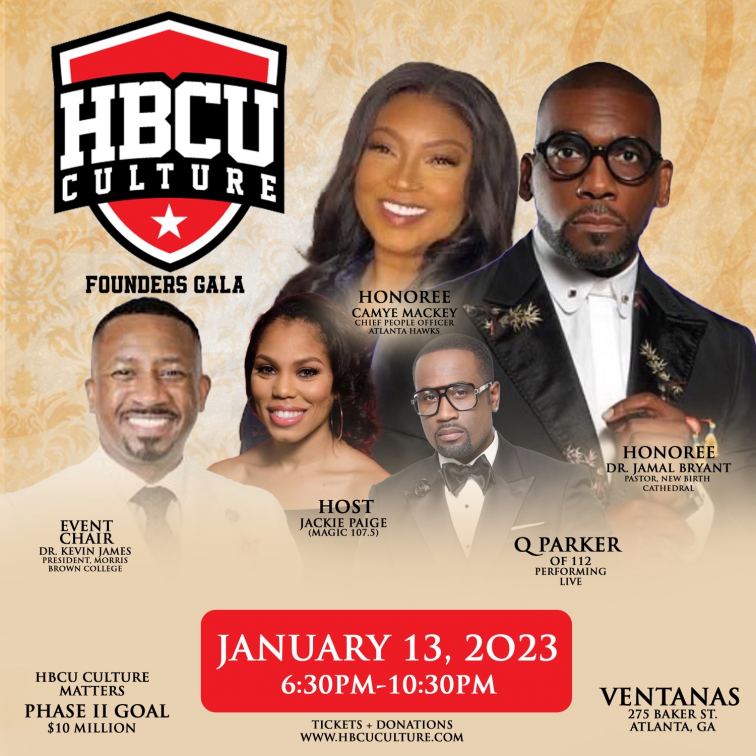 The weekend will kick-off on Friday, January 13, 2023, with a Founders Gala at Ventanas  on Bakers Street in downtown Atlanta from 6:30 – 10:30 pm for 200 guests.  Dr. Kevin James, President of Morris Brown College, will serve as chairman of the gala.  Awards and honors will be given to community leader and activist, Pastor Jamal Bryant of New Birth Missionary Baptist Church with a ministry of over 20,000.  Joining Pastor Bryant in the honors category will be Camye Mackey, Executive VP/Chief People Diversity/Inclusion for the Atlanta Hawks and and State Farm arena.  The purpose of the Founder's Gala is to support the HBCU Culture 2023 $10 Million fundraising goal to help students become graduates. This event will be a luxury celebration of HBCU Culture with Alumni, Executives & Leaders. Tickets & Sponsorship range from $500 - $50,000.  A portion of proceeds from ticket sales will be donated to the 2023 Focus HBCU Institution at Morris Brown College. To learn more and secure tickets for the 'HBCU Culture Homecoming Fest & Battle of The Bands MLK Weekend Edition' at 5 p.m. on Sunday, Jan. 15 at State Farm Arena in Atlanta,

More on Georgia Chron
Approaching his senior year at Johnson C. Smith University, Founder Frank Johnson made the tough decision to drop out of college and help provide for his family after his father, who covered his tuition, became ill. Established in 2018, Founders Frank & La Keisha Johnson, who met through the marching band at JCSU, developed HBCU Culture Legacy Foundation 501c3, with a vision to provide reliable resources to HBCU institutions & students. From year to date, the foundation has successfully provided over $1.9 million in scholarships and educational experiences to over 5,000 students.