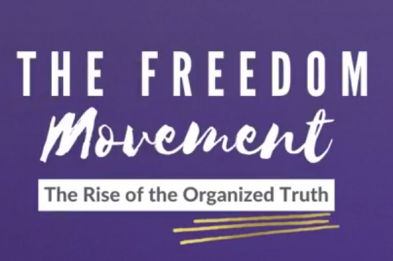 ROSWELL, Ga. - GeorgiaChron -- Roswell, GA – Democrats, Republicans and Independents alike, millions of Americans are becoming increasingly concerned about today's agenda-driven media and the disinformation programs and cognitive dissonance campaigns they promote each day. To them, truth no longer matters; sadly, what is most important is the appearance of the truth. Why? Because they know most people will submit to their narrative when it's being presented as being factual.

Fortunately, there is a group of American patriots who are standing up against psychological oppression of every kind. Known as the Freedom Movement, it is gaining more momentum as each day passes. Freedom Movement members are people from all political parties and every walk of life who want their individual rights honored, thus preserving the time-tested mantra of "Life, Liberty and the Pursuit of Happiness".

"Using what we refer to as organized lies, specific outcomes are being managed all across the world by a small group of people," said Timothy Ray, Founder of the United Intentions Foundation, the organization which started the movement. "In many ways, including most recently the Coronavirus, people are being divided and are scared to death as a result. It is time for the rise of organized truth – and that's what the Freedom Movement is all about."

More on Georgia Chron
One person alone cannot make a sufficient difference; this has been shown many times. It takes peaceful people who are passionate about restoring unity; who are willing to display courage when necessary; and who motivate others to join them.

"The United States Constitution is only effective when it's supported by the American people. Anytime it is not followed and preserved, it becomes a serious issue," said Ray. "When tyranny is left unchecked, it will only grow. The Freedom Movement exists to bring accountability to those who are elected to serve and represent us. We have to prepare ourselves now because what we've seen so far is nothing compared to what's coming in the future."

Those interested in finding out more – or those ready to sign up for the movement – should go to http://www.UIMediaNetwork.org and look for the Freedom Movement tab.